skip to main | skip to sidebar

The View From Here... 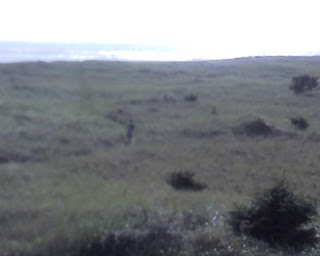 ...is better than the view from inside the endoscope yesterday.

If you look closely, you can see Mr. W in the middle of the picture weed whacking our path to the beach. It's a crappy picture I took with my cell phone. That's the sun shimmering off the ocean in the far ground. It has been almost two months since we have been to our beach house. Hence the need for weed whacking. The last time we were here, I was in my 2ww and had learned I had a BFM on the beta scale. M as in...maybe. Sigh. Other than this post today, I have decided to have an IF-free weekend here with friends. I'm going to relax. Enjoy the incredible weather. The local fireworks. And the idiotic things other people do at the beach on a major holiday weekend.

But I digress...to yesterday's scope. Thanks for asking, Meinsideout . It was, well, not ideal. But I guess, not horrible. I have a great GI doc. And that's saying a lot coming from me. Aside from Mr. W, I am not easily impressed with medical professionals. And perhaps, because of Mr. W, I am hard on them. I ask lots of questions. I don't like to be patronized or idiotized. I expect thorough and courteous treatment. And I'm ok with educated hunches for the inexplicable (duly disclaimed of course). I have no tolerance for pompousness and I dislike someone who has not at least "flipped" through my chart before they walk in the room. Really...is that too much to ask? I felt Dr. GI met these criteria with flying colors. And, he treated me like the educated, articulate person I am (even though Mr. W was present).

Ok, ok...so the scope. Dr. GI was genuinely concerned about doing it if I had a positive beta (because of the DIY IUI last weekend) so he had a blood draw done right then and there while we waited to begin. It was negative. Big surprise, but also too early, technically...which I told him. He said it was our call. I said based on our recent fabulous lab news the day before, I was fairly confident it was a bust. Mr. W agreed. Dr. GI said the only possible risk was the unknown effect of the sedatives administered for twilight. After some discussion, we agreed to proceed. I appreciated Dr. GI's concern and candidness. And he even let Super Doc watch the whole procedure!

I'll tell you how it went, but I want to say I am clearly not the poster child for endoscopies. If you ever have to have one, it will not likely be as miserable as mine. I was not in twilight for a good portion of it. In fact, I was awake, gagging, for most of it. After the cocktail was administered, I was given a little bite block with a hole in it to keep my mouth open for the scope, while preventing me from biting on it. And then I was out. Uhm...for a bit. I woke up (who knows when) gagging on the damn thing and feeling the hose go up and down my throat, followed by some suction action in my mouth and conversations between Dr. GI and Super Doc. And then I was out again. (Mr. W said every time I woke up they hit me again with the cocktail until apparently they decided I'd just plain had enough to sedate a cow...which I am not, but feel like I resemble sometimes.) I remember waking again and hearing the nurse talking and I remember opening my eyes a couple of times and seeing a little towel covering my face. In any case, Dr. GI told Super Doc my continual gagging was very common in people with IBS, and they don't know why, other than the body has a constant propensity to want to expel things.

So the verdict? Dr. GI took 6 biopsies - 2 of my stomach, 2 of my esophagus, and 2 of my small intestine. Those are all pending. He also used a second, ultrasound scope and scanned every organ he could. All normal. What he did find with the scope was severe gastritis in the stomach (excessive acid causing these little bumps) and jackpot...a hernia in my stomach! Did you know there was such a thing? I didn't, but now I have a little picture of one inside me. (Yeah, I got some nice photos as a GWP but I'll spare you all.) Dr. GI said the hernia is old, meaning it's been there awhile, but the recent IVF stress and weight gain have aggravated it enough to make me miserable. He didn't feel surgery was necessary and that a bit of weight loss (seriously, he said just a little...) should help, as well as some treatment for the acid. And oh, de-stressing. Uh...yeah. Of course, this is all pending the biopsy results which he expects to be normal.

So I went home somewhat relieved there wasn't something serious and that the ultrasounds were normal. Of course I have an incredibly raw, sore throat. And because I maxed out the cocktail service, I hailed whatever I tried to eat the rest of the night.

For the rest of the weekend, I shall relax and enjoy the sound of the ocean among the company of good friends. I might even have a glass of wine, if the stomach and throat will oblige. And next week, I'll resume the IF obsession and 10 more days in court, which ironically, are the result of... the view from here.
Posted by K at 6:01 PM